Protein and Fat in a DIY-APS setting


No matter if on a high- or low-carb diet, fat and protein is tasty as well in a steak with green beans as in a pizza with extra thin crust and extra cheese on top. And as a type 1 diabetic I need insulin to cover it if I want my bg levels to stay in range. [1]

Traditionally I would give an extended bolus. Something that does not fit very well into the world of a closed loop as now the algorithm should take care of how much insulin comes out of the tip of my infusion set.
As the loop now increases the insulin when the bg rises and the rise from fat/protein is rather slow, the loop helps quite a bit. Still not 100% satisfactory as for larger amounts my CGM hovers above target for hours - and any unplanned BG increase won't be compensated by the loop if it is already at it's limits

Hinting the loop that it can give insulin more agressively after a meal works quite well by entering "fake carbs". This is an equivalent of "carbs" you expect a meal to have impact on your blood glucose. I simply enter those as carbs into my system. Maybe "carbs equivalent" is a better name?
With the dynamic carb absorption model from OpenAPS that AndroidAPS also adopted this works quite well. The algorithm will detect a rather slow carb absorption and give insulin accordingly.

As a safety feature, the algorithm will assume a minimum carb absorption. This means that after a couple of hours it will believe your meal to be fully absorbed. For smaller and medium meals this is no problem as the rest will be handled by the closed loop system even in "no COB" mode. With larger meals I still do see a small rise a couple of hours after the meal.

A trick to handle the late rise after a protein-rich meal is to enter some carbs in the future. This way the closed loop knows that there is some cabs and it still can work a bit more agressively.

This also has the advantage that some advanced freatures like Autosense and Autotune will not consider this late rise as some form of insulin resistance but attribute it correctly to being meal-related.

This is my test meal: 400g of pork strips in tomatoe sauce: 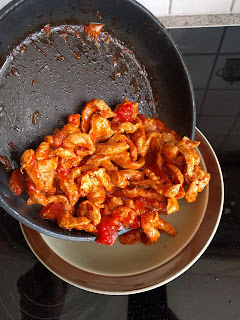 This was the situation before the meal: 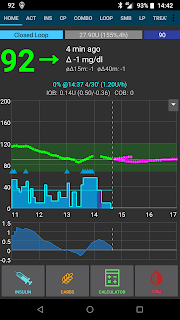 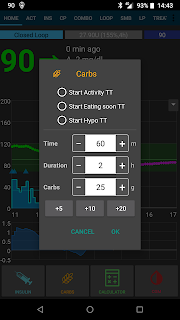 With the new carbs dialog I entered what I thought could be the equivalent carbs (25g), scheduled it 60 minutes into the future and set an interval of 2 hours.

I didn't give any bolus. I do have SMB (super micro bolusing) activated. You can see them as the small blue triangles.
This is how it looked like after I confirmed, the carbs are scheduled as multiple events with 15 minutes in between: 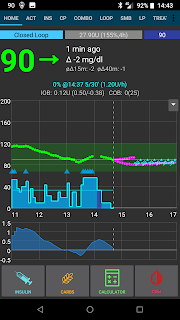 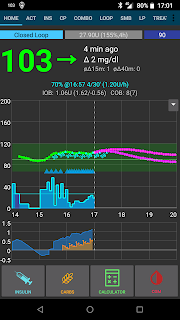 This is how it looked like during the extended carb interval!
The COB curve (orange) has a saw tooth like shape. Due to the COB, there were a lot of SMB so the loop did its job perfectly :)

Thank you Milos Kozak, Dana M. Lewis, Scott Leibrand, Emma Black and all the other devs for sharing this great hobby.

Thank you Amy Tenderich, Howard Look, Brandon Arbiter and Wes Ton for inviting and helping. And of course Miyeong Kim for the lovely video at the end.

It has been a great experience, my first presentation in English in front of a larger audience and a great peasure finally meeting everyone from the #WeAreNotWaiting community on the other side of the Atlantic in person.